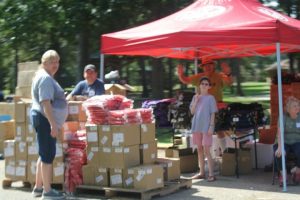 National nonprofit groups and early response agencies often get media coverage following a disaster as they head into the impacted area and set to work on life-saving and life-preserving activities.  But once the media’s attention has shifted to the next breaking story, hard-hit regions disappear from the public consciousness, even as those national groups remain onto help with clean-up and longer term rebuilding.

So, it’s no surprise that hard-working local nonprofit groups rarely get significant coverage, even as their work goes on for months and even years.  But it’s these local groups, often created in the wake of a disaster, who extend the spirit of recovery for the long-term. These groups are frequently comprised of people who have no previous experience in disaster recovery, but they band together to assist neighbors and strangers alike in the wake of a major disaster event. Local groups may not have the scope or organization of a national disaster recovery nonprofit, but their concern for their neighbors ensures that their work will endure until the last person is back home.

Southeast Texas (SETX) Civilian Taskforce is one such group. Formed in the aftermath of Hurricane Harvey, the organization was created by and thrives because of the passionate work of its founders and its tireless efforts to aid the communities of Beaumont, Port Arthur, and Orange since the storm.  SETX Civilian Taskforce holds monthly drives to distribute goods to hurricane survivors who lost everything. Their work wouldn’t be possible without donors like Cabela’s and CVS.

As enduring Good360 partners, these companies understand the need for a long term presence following a disaster. They have donated clothing, small appliances and hygiene supplies critical to survivors during the storm and long after. Their donations make the efforts of groups like SETX Civilian Taskforce go further and help more.

As the world moves on to the next disaster, local organizations will tirelessly continue their work to help their communities recover and thrive. Good360 will continue to be there for the short and long term, and looks forward to continuing our work with organizations like SETX Civilian Taskforce to do so.