When Harvey’s waters rose, the lights went out. And long after the waters receded, many survivors remained in the dark. Flood waters leave homeowners with many issues, most of which are still with the owner long after the media attention fades. 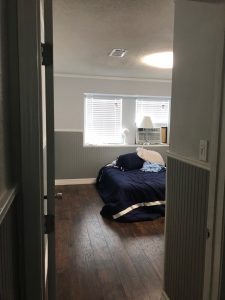 Phan and his wife were eight months pregnant when Harvey made landfall. Complicating matters, his mother was also receiving regular dialysis at the time. His family lived in Rosharon, TX – one of the hardest hit farming communities. Phan was responsible not only for his wife’s safety, but also for four of his nephews who were living with him at the time. By the time Phan returned to his home, it was a total loss. Rather than focusing on his own loss, Phan looked outward. There were many people in his community who needed help, and despite his loss he had the skills to help them.

Phan’s efforts to take care of his wife and newborn son in addition to his community meant that his own home remained neglected. Sewa USA saw his need and stepped in where he couldn’t. As a long term recovery group based in Brazoria County, Sewa USA is one of the organizations that remains active in recovery efforts over a year after Harvey struck. Their attention is still needed. Many in Brazoria County are still living in homes with no power, no walls or a porous roof. Phan’s home is, thankfully, no longer one of those.

As Sewa neared completion on Phan’s home and those of his neighbors, they realized that their supply of lighting was dwindling. This is where Good360 and Acuity lights were able to help. Acuity looked beyond the immediate response efforts and towards creating a lasting impact that would allow survivors to return home with a smile on their faces each night. To this end, the company generously donated 40 truckloads of lights to Good360 to be used in the enduring recovery effort. Some of those lights were able to help Phan and his family redeem a sense of ownership in their property once the rest were rebuilt.

Although Hurricane Harvey has come and gone, the work of Sewa USA and organizations like it is just beginning. Disaster Recovery commonly takes several years in heavily hit areas. With partners like Acuity Lights, Good360 can ensure its partners have a way to turn the lights back on after a disaster.