Hurricane Harvey descended upon southeast Texas in August of 2017. After four days and three separate landfalls, the Category 4 hurricane caused $125 billion in damage to the second most populous state in the country. To the north, record flooding destroyed homes with 12 feet of water recorded in some areas. To the south, 130 mph winds destroyed homes that had stood for generations. For many Texans who were impacted, Harvey left significant devastation that required extensive repairs to houses and total replacement of the items inside of those homes. In Harvey’s wake, tens of thousands of structures sustained significant damage and still others were completely destroyed.  Many families and individuals lost everything. 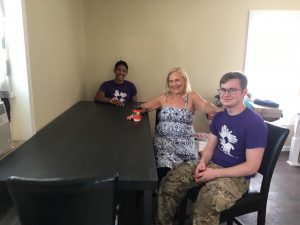 Leading furniture retailer and Good360 partner, Rooms To Go, made a significant public commitment to support hurricane recovery very early on, but also recognized that it could be months before clean-up and rebuilding progressed to the stage where furniture could be distributed.   Working closely with Good360 and our rebuilding partner, All Hands and Hearts – Smart Response, the company donated furniture by understanding what impacted families needed and then delivering to those specifications.  Full furniture sets were provided to survivors in Houston and Port Aransas once the homes were sanitized, repaired or rebuilt and ready to receive furniture. These furniture sets included mattresses, dining room sets, couches and rugs –  day-to-day items that many had lost and that are also often expensive to replace.

One of the recipients of this donation was Audrey Davis. Audrey lost her home when Hurricane Harvey initially made landfall and was left in her house for two days with her husband until being rescued. She mentioned, “I’ll never forget seeing that much sewage water fill up my home and not being able to move or get out”. Her family was displaced for months moving from the convention center to hotels until finally moving back to her home in June of 2018. She was so grateful for the donations upon returning, she wasn’t sure how long it would take for her to get her house back in order. 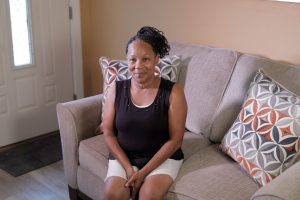 Instead of passively observing the rebuilding teams in her home, Audrey took every opportunity to participate herself – painting trim and helping to install her new floor were just a couple of the ways she contributed. She was so involved from the beginning of the process up until her Rooms To Go donation arrived. Audrey helped All Hands and Hearts – Smart Response volunteers transport and assemble the donated furniture including a loveseat, sofa and two beds with brand new mattresses. Audrey’s journey post-Harvey has not been easy, but now that she is back in her home, some sense of normalcy can resume.

Beatrice Richards of Houston, Texas also received Rooms To Go furniture for her repaired home. For the Richards family, Hurricane Harvey was especially devastating, because it damaged a house that three generations have called home.  The Rooms To Go donation was more than simply furniture to the Richards family; it also represented an emotional step forward to reclaiming this space for their family.  Even the delivery and unveiling of the furniture was a family affair – Beatrice’s granddaughter implored the family to wait for her mother to arrive home so they could all “unwrap” their new items together, demonstrating that the family could create beautiful new memories, even after a major disaster. 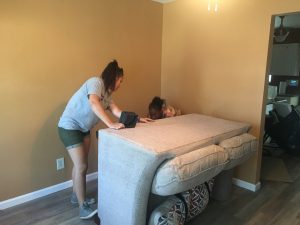 Thoughtful and strategic partners like Rooms To Go are essential to the long-term recovery effort after a major disaster. The company’s understanding of the disaster life cycle, coupled with their willingness to respond to the actual needs on the ground as they evolve, make them an important partner for organizations like Good360 and All Hands and Hearts – Smart Response. Well-informed and coordinated giving across every stage of a disaster provides a sense of renewed possibility to disaster survivors and aligns with Good360’s mission to provide hope and dignity to impacted families and communities. Through our partnerships with socially responsible companies we will be able to aid in the efficient recovery from disasters for years to come.