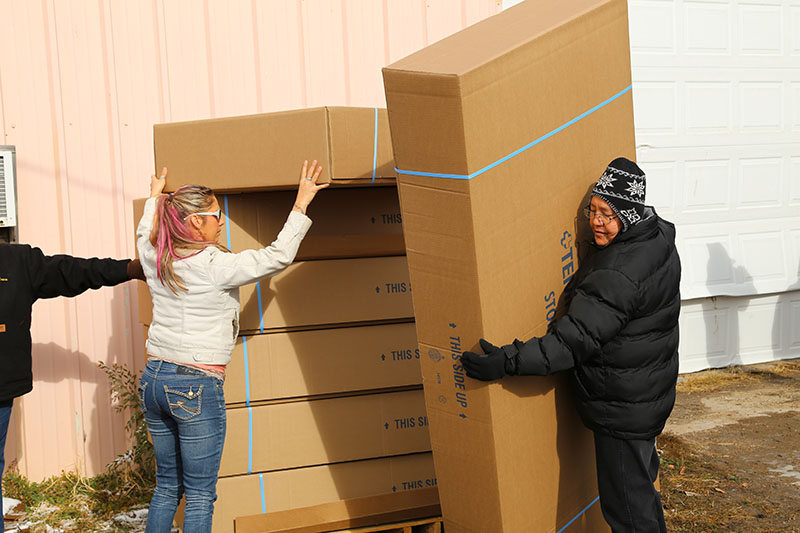 When a major disaster strikes anywhere in the U.S. or abroad, Americans have no qualms about opening up their wallets.

They also don’t have any qualms about opening up their closets.

This completely well-intentioned, but misguided practice has resulted in literally tons and tons of unwanted donations being sent into chaotic disaster zones. Such “in-kind” donations from individuals and companies actually hinder relief efforts by diverting precious manpower to sort through it or by preventing needed supplies from getting through overloaded ports and airports. Often, the majority of these donations ends up getting shoved into landfills.

Some of the more high-profile examples include:

Education is a crucial component

These heartbreaking examples illustrate why a major part of Good360’s core mission has been to educate both corporate partners and the general public on best practices in “purposeful giving.” This concept requires companies, philanthropists, and other well-intentioned givers to be more informed about the actual needs of the community they’re trying to help before they donate.

“We are dedicated to connecting companies with nonprofits so that the right people receive the right products at the right time,” says Tiffany Everett, Good360’s director of disaster recovery. “Historically, up to 60 percent of products donated during a disaster end up in landfills or otherwise go to waste. It’s so critical that we’re able to make a dent in this number to ensure that affected communities get exactly what they need when they need it, as well as to mitigate the environmental impact.

Our commitment to reducing the amount of wasteful giving begins with being a prime resource for corporations looking to make in-kind donations. Just as many individuals feel the need to donate something to “help the cause” during a disaster, companies often want to jump on a highly publicized event. Sometimes this comes out of a genuine desire to be helpful; other times it’s motivated by an opportunity to get media attention for their products.

Either way, the product donations don’t always match the needs of the community in that particular moment. For example, during the water crisis in Flint, Michigan, a company that makes water purifying filters reached out to Good360 to see if it could make a donation. Unfortunately, the company could not guarantee that its filters met standards for removing lead contamination — which is what prompted the crisis in the first place.

“That donation would have been really useful in other places where lead contamination wasn’t an issue,” Everett says. “So, it’s a matter of educating companies about being more strategic in their giving. During disasters, we want to be the resource for companies looking to donate needed goods so we can make sure the appropriate products are going to the right places where they can make the greatest impact.”

The four phases of disaster response and recovery

When it comes to disaster relief and recovery, timing is critical. At Good360, we look at disasters as having four distinct phases:

Each phase prompts different needs and, therefore, different product donations to meet those needs. In the mitigation period, we are focusing on what can be done ahead of time to mitigate the worst effects of any disasters. For example, we have been building a program to preposition critically needed products in strategic locations around the country. This allows us to respond faster by having the goods and the transportation ready to deploy in the event of a major disaster.

In the preparation phase, the emphasis is on emergency preparedness: stocking up on the right supplies and creating emergency management plans.

The response phase is what many people see on television: Emergency crews picking through debris, making rescues, and unloading relief supplies off planes and trucks. This is the phase that gets the most media attention — which can inadvertently prompt redundant and wasteful product donations.

“Companies often respond to what they’re seeing in the media,” Everett says. “Unfortunately, the media coverage can be three or four steps behind what’s actually happening on the ground. So companies end up organizing an employee drive or looking through their warehouse to collect donations, but the community’s needs have already changed by that point.”

For every donation that Good360 facilitates, we work closely with NGOs and nonprofits in the community who have a very good understanding of what’s needed by disaster victims at that particular time. This prevents donations going to people or places where they are not helpful.

In Flint, for example, many neighborhoods actually ended up with more bottled water than they needed, while others didn’t have enough. In other cases, it doesn’t make sense to ship donated goods to faraway locations when those goods can be procured faster and cheaper locally.

Working with our corporate partners, Good360 can often obtain bulk supplies such as bottled water at pennies on the dollar.

Focusing on the long tail of disaster recovery

The final phase of a disaster is no less important. Good360 has focused heavily on long-term recovery efforts because this is when the media and public attention tends to dwindle, leaving vulnerable populations potentially neglected.

Our initiatives in this regard include participating at disaster management conferences, forming the National Disaster Recovery Council, building a technology platform to connect companies with nonprofits responding to disasters, and, of course, coordinating $400 million in product donations each year.

Again, education is a critical piece of our efforts here. Many companies don’t realize that their products can be hugely beneficial during the recovery phase, even if these supplies don’t seem especially relevant.

“For example, donations of mattresses, pillows, bedding, and diapers can help families as they’re rebuilding because they’ve devoted all of their money to getting the roof or the plumbing fixed and don’t have enough to buy the basics,” says Everett. “We want to be the place where companies can learn about what donations are actually needed when, and make sure the donations are coordinated with the nonprofits working on the ground.”

By coordinating with Good360, companies can be certain that their product donations are purposeful and strategic. Such thoughtful giving will go a long ways toward eliminating the waste that happens in disaster recovery. In the end, this benefits both the companies giving needed goods and communities that are in need of donated goods.

We need more corporate partners to help. Get involved with Good360 to start your product philanthropy program.

Tiffany is a dedicated nonprofit leader leveraging years of experience in program development and evaluation, promoting mission alignment and seeking new ways to engage the community to holistically serve individuals impacted by disaster and crisis. As the Disaster Recovery Development Manager, Tiffany has moved over $3M in product to eight domestic disasters and one international disaster in 2016. Tiffany received her Master’s in Public Health from the University of Virginia and a Bachelor’s of Science in biology from the University of Maryland.