Posted at 09:00h in Impact Stories by Shari Rudolph 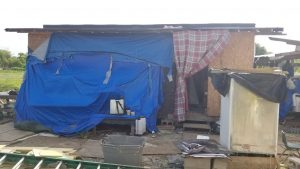 Rosharon is a small community about 50 miles south of Houston. An immigrant community comprised mostly of Laotian, Cambodian and Mexican families, most households earn a living through selling fruits and vegetables grown on their property. This community started to grow in the early 1980s and has a strong identity in farming; each home has four to five greenhouses that grow everything from pumpkins and water spinach to oranges and limes.

When Hurricane Harvey poured 27 trillion gallons of water on southeast Texas, Rosharon was one of the hardest hit communities. The sheer amount of water turned the roads of the low-income community into slush overnight. It ripped roofs off of houses and destroyed greenhouses. When all was said and done, many residents of Rosharon were left effectively homeless. This problem was compounded by the cultural practice of housing multiple generations in one domicile. Many residents, as well as their children and grandchildren, were forced to move into small shacks that offer little to no protection from the elements. Many homeowners are still in this situation 11 months after Hurricane Harvey. 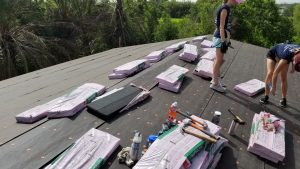 Kim was one such resident. Kim and her family make a living through selling water spinach and other tropical vegetables at the Hong Kong City Mall in Houston. Winds and rain from Hurricane Harvey ripped the roof off of Kim’s house and drenched the remaining material. Her home was considered a total loss. Although FEMA and nonprofit groups provided some assistance, all efforts were set back every time it rained. Without a durable roof, Kim was relegated to living in a small shack with her children behind her house.

Owens Corning has been a long-time donor and partner of Good360 and had a large amount of excess shingles in their Irving, Texas warehouse. Knowing that many people lost their homes after a tumultuous hurricane season in 2017, they jumped into action and generously donated several truckloads of shingles to homes in need. Because of the donation from Owens Corning and the work of several volunteer groups, Kim’s roof is now in the process of being repaired. 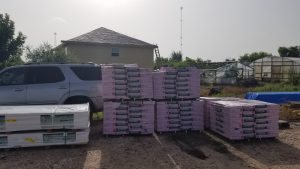 There is still much work to be done in Rosharon. In addition to home repair, many residents have dealt with months of income gaps due to the destruction of their green houses. The community will have to deal with secondary and tertiary effects of Hurricane Harvey for many years to come, but getting roofs over the heads of the community is an extremely important first step.