Hurricane Harvey caused catastrophic damage that continues to be felt today.  Groups affected more severely by storms like Harvey are groups that struggled more to begin with.  Little Cambodia, also known as “The Village”, in Rosharon, Texas was hit particularly hard by Harvey.  The Village is a predominantly Cambodian community, made up mostly of immigrant and refugee families who settled in the area after fleeing violence in their home country.  Before Harvey, people in the community lived mainly in poorly constructed homes or run-down trailer homes.  Additionally, many families lived in multi-generational and overcrowded homes.  After Harvey, every home was damaged to a different degree, with 22 homes destroyed completely.  Residents who lost their homes have been living in makeshift shelters for two years.  Thanks to Good360’s nonprofit and corporate partners, this reality has changed for several families. 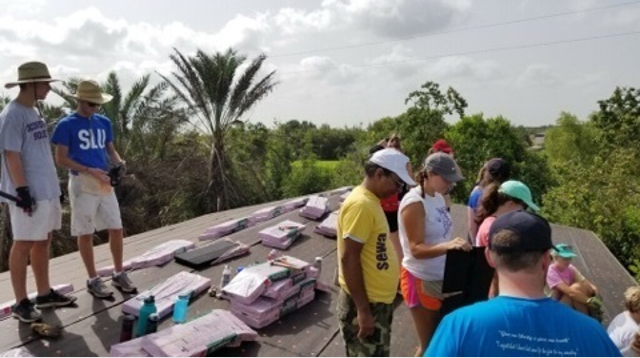 Sewa International is a nonprofit partner of Good360’s that serves and empowers local communities in Texas.  After Harvey, they helped rebuild The Village to a standard higher than that which preceded Harvey, thanks to a donation of roofing shingles from GAF.  Seven of the homes that were completely destroyed by Harvey were provided with roofs in the reconstruction process, giving families security, shelter, and a place to call home.  With a roof over their heads, they can now focus on returning to work and school.

Phoun Pech is a widow who was significantly impacted by the disaster.  She lived with 11 members of her family in a small home that was fully destroyed by Harvey.  In addition, the greenhouse where she cultivated water spinach, the family’s main source of income, lay in splinters after the hurricane. Her family created a shelter after the storm, but they lived without running water or electricity and slept on pads on the floor of their shelter.  Sewa was able to build Ms. Phoun’s family a new home, using the GAF shingles for the roof.  Ms. Phoun’s family is one of the many that now has a brand-now home and can focus on their livelihood thanks to the donation of shingles.  A member of Sewa talked about the impact that rebuilding seven homes had on the entire community, saying, “Each house that goes up, each life that is restored gives hope to every resident in Little Cambodia. Because, when the individual succeeds, the whole community thrives.”  Thanks to Good360, GAF, and Sewa International, communities are being rebuilt, bringing people hope.