Students in Moore, Oklahoma, stay “Student Strong” as they head back to the classroom - Good360

19 Aug Students in Moore, Oklahoma, stay “Student Strong” as they head back to the classroom

Posted at 16:25h in Good360 Initiatives, Nonprofit Spotlight by Good360 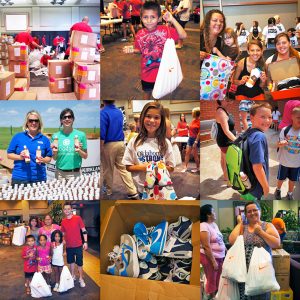 On May 20, 2013, an EF5 tornado touched down in Moore, Oklahoma, destroying the medical center, two elementary schools and approximately 1,200 homes. Only three months since the disaster, most families are still working on rebuilding a damaged home or searching for a new one, which has left little time for them to get their kids ready to learn.

So last Thursday, with the first day of school just around the corner, Good360 joined local and national nonprofits and businesses in Feed The Children’s “Student Strong” back to school event.  Through generous donations from Nike, Burt’s Bees, and Thirty-One Gifts, Good360 was able to provide apparel, personal care products, and cinch sacs to the over 4,000 event attendees.

“They’re tight, but they fit!” was the excited verdict from nine-year-old Alexis, whose home was “completely obliterated” by the storm. She was accompanied by her three siblings – Dominic, Baily and Damon – and her grandmother. Until last Thursday, she only had flip-flops, but was fitted for a new pair of Nikes, and was now ready for the new school year.

“I really feel like the whole state is coming together,” she said. “Normally I feel like everyone kind of does their own thing, but now everyone’s leaning on each other.”

Middle school friends Leslie, Henry and Jacqueline had come down to the event while their parents were at work. Repairing his house had been really expensive, said Henry, who picked up a new Nike shirt, shorts, and sneakers that day.

“We’ve been saving money to spend on the house, and that means things like shoes just kind of fall by the wayside,” he said.

In addition to school supplies, attendees were treated to free hairstyling from Paul Mitchell Salons and eye screenings from Feed The Children’s eye clinic. Eleven-year-old Tyler had just been fitted for his first pair of eyeglasses. According to Laverne, the volunteer who fitted him, he “couldn’t even read the ‘E’” when she first had him go through the chart.

“They help me a lot,” he said. “I didn’t even know how bad my eyes were. Now I’ll be able to read the board when I go to school tomorrow.”

Some families who attended “Student Strong” took off work to get their kids these much needed back to school supplies. Brooke, who attended the event with her four children, said “I actually had to take off work to come here today, but new shoes for all the kids is something we’d never be able to afford. It’s going to help so much.”

In addition to sending apparel and shoes to the event, Nike employees also volunteered their time to help with the distribution.  Over 40 employees from the Oklahoma City and Dallas stores fitted the students and their families with new sneakers, socks, shorts, and shirts.

When asked why he was helping out, Brandon from the Oklahoma City store stated, “I had some friends who were affected, so that’s why I’m here. It’s been good. I’ve seen some people crying; they’re so thankful.”

Amber joined in stating, “I just wanted to give back. I’m from Dallas, and being here has really been great. Even though it’s mostly kids who are getting fitted, it’s been almost more exciting to see the parents be like ‘I can get something too?’ I’ve teared up a bit.”

As Good360 continues to focus on helping those affected by disaster, not only in the emergency phase, but also through recovery and rebuilding, we were proud to be a part of this all-day event.  We would like to send special thanks to our generous donors for coming together to assist those affected by the tornados that struck Oklahoma earlier this year.  In addition to Nike, Burt’s Bees, and Thirty-One Gifts, we would also like to thank Regis Corporation, Red Wing Shoe Company, QVC, Nilodor, and The Children’s Place for their disaster recovery donations.

Thanks to the customers and employees of Smart Media USA for their office fundraiser that helped us get the merchandise and staff in place to make this amazing day happen!

You can help in our on-going rebuilding efforts!

If your company’s employees would like to hold a fundraiser to help with Good360’s disaster recovery efforts, email Chris Blake at chris@good360.org

To donate merchandise from your company to our on-going disaster recovery efforts, contact Doyle Delph at doyle@good360.org.