Posted at 21:26h in Good360 Initiatives, Nonprofit Spotlight by Good360

As the winner of Good360’s Facebook contest, Sandra Lourenco was able to decide where to distribute a $2,500 credit within the Good360 nonprofit network.

As a school nurse for more than 30 years, Sandra Lourenco met many kids in her community who had not much more than the clothes on their backs. She saw kids who came to school without underwear or socks because their parents couldn’t afford those items, children who couldn’t remember their birthday because they simply never celebrated it.

When she retired, Lourenco knew she had to do something to give back to her community of San Bernardino, California. She started working with Santa Claus, Inc. about four years ago to help give those kids hope, joy, and something to celebrate.

Lourenco chose to distribute $2000 to Santa Claus, Inc., which provides new toys, new clothing, and new books to local under-served children. She distributed the remaining $500 to Clothes for Kids in Lynnwood, WA, a nonprofit started in 1984 that meets the clothing needs of low-income students in Snohomish County, Washington.

“It feels good to help someone else,” she says. “To know you’ve made a difference in someone’s life.”

Lourenco grew up in Portland, Oregon, and moved to California for college. Though she moved around some, she eventually settled in San Bernardino and first heard about Santa Claus, Inc., in the early 1970s. “I used to help them occasionally as a volunteer, and was very aware of their work in the community,” she says. Now she is a department chairman for them and works with other nonprofits to provide goods for their programming. 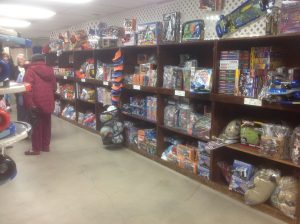 Families can come privately to Santa Claus, Inc., warehouse to get presents for their children for the holidays.

Santa Claus, Inc., was formed in 1952 by Mignon Schweitzer to help families get gifts for their children for the holidays in a dignified and private manner. “Preserving dignity is still very important for us today,” says Lourenco. “All of our families are able to come to the warehouse privately to choose gifts.”

Although Santa Claus, Inc., has strong programming during the holiday season, the nonprofit also gives back all year round by contributing items to local schools, hosting back-to-school backpack giveaways, providing goods to grandparents raising grandchildren alone, and donating baby clothing to new mothers in local hospitals.

The charity has been around for several generations, so they can see the effect that Santa Claus, Inc., has had on families. “I’ve heard from people who are successful adults who say they were helped as kids by Santa Claus, Inc.,” says Lourenco.

Santa Claus, Inc., has been getting goods through Good360 for a little over a year now. They have received clothing and other items from the online donation catalog, and Lourenco says they will be putting their $2000 credit to good use. Because Good360 is able to leverage every dollar, Santa Claus, Inc., could receive up to $60,000 in product value from America’s top brands.

“Santa Claus Inc. is so grateful to Good360 for their coordination of goods available for nonprofits like ours. This season alone we will be able to serve 17,000 kids in our warehouse thanks to donations like yours,” says Lourenco.