Posted at 15:14h in Disaster Impact Stories by Shari Rudolph 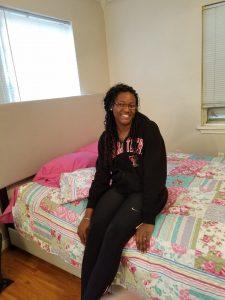 When Hurricane Harvey hit, 80% of homes in Dickinson, TX were flooded. For many residents in Dickinson and Texas City, the devastation still lingers in tangible ways. Some survivors emptied out their checking and savings accounts to pay for home repairs. Others now have accounts in collections because of the loans they needed. Some survivors are still living in mold–infested homes. Somewhere along this spectrum, a large majority of survivors have completed their home rebuilds, but have no money to replace furniture.

While the media has long since left, this well known mattress retailer has remained committed to disaster recovery in a huge way. Their commitment to disasters throughout the country has been vital in providing survivors high cost items like mattresses which would have otherwise been unattainable. Through Good360, these recent donation of mattresses to survivors in Texas City has given this group of survivors a comfortable place to sleep at night.

The partnership that made this connection possible came via United Way Galveston County Mainland. After Hurricane Harvey, the branch connected with High Socks for Hope, a nonprofit started by Major League Baseball pitcher David Robertson. High Socks for Hope was launched in the wake of tornadoes in Tuscaloosa, Alabama. Since then, the organization has been active in New York, Louisiana, Florida, and Texas. The work between United Way Galveston County Mainland and High Socks for Hope has resulted in dozens of families recovering much faster than they would have without the assistance.

The mattresses donated went to veterans who had been sleeping on the floor after depleting their savings on rebuilding and elderly survivors who have since been diagnosed with additional illnesses. These mattresses are high-need items that are critical to survivors on their road to recovery.

This retailer’s commitment to disaster recovery has been exemplary through the past decade, as several catastrophic weather events have impacted the United States. Recovery for these events will always outlast the media coverage for the events – Hurricane Katrina recovery only officially ended in 2017. Despite the lack of media coverage for long term disaster recovery in general, this company has consistently supplied mattresses to the effort. Their focus on recovery demonstrates that their compassion doesn’t fade when the cameras do. Good360 is privileged to be part of their efforts as a partner.