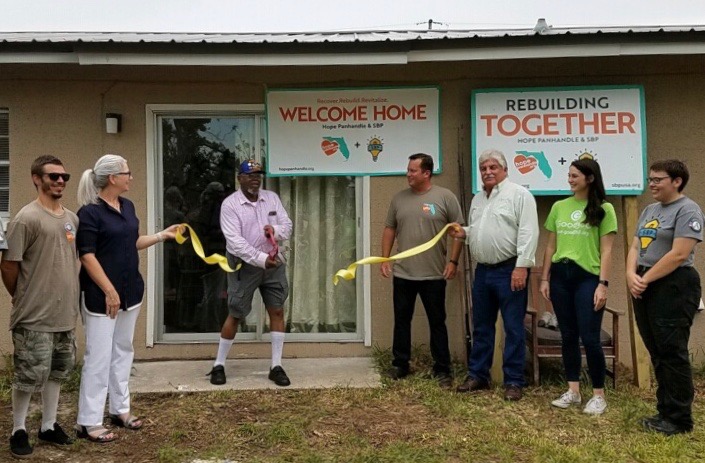 Posted at 12:56h in Disaster Impact Stories by Shari Rudolph

Communities in the Florida Panhandle that were hit by Hurricane Michael in 2018 are still reeling from the devastation of the storm. Due to a severe lack of funding, the rebuild process has been extremely slow with only a few national nonprofits able to deploy their resources to provide aid. SBP is one of the groups that has made a commitment to helping communities impacted by Michael. They have partnered with a local nonprofit, , to utilize their intimate knowledge of the community to best serve the needs of the families they are working with.  SBP and Hope Panhandle have begun the rebuild process on 5 homes in the Panama City Beach area. Thanks to donations from two of our largest donors, Good360 was able to provide flooring and mattresses to go into these newly repaired homes.

In July 2019, the home of Robert Black* was completed, and he was finally welcomed home with a ceremony nearly a year after Hurricane Michael hit. Mr. Black is an elderly Marine veteran who was living in Panama City Beach when Hurricane Michael hit. The home he lived in for the majority of his life was crushed under a tree that was toppled by the 120mph hurricane winds. Half of his home was destroyed, and the inside was completely littered with water and debris.

FEMA gave Mr. Black enough money to live in a hotel for few weeks but once the money ran out he was left with nowhere to go. Mr. Black took to sleeping in his car every night and getting meals wherever he could. Without any hope of repairing his home, Mr. Black resigned himself to the fact that he could be sleeping in his car until his final days. Luckily, the founder of Hope Panhandle, Mara Harrison, took notice of Mr. Black’s situation and decided that they had to intervene. Hope Panhandle and SBP began immediate work on Mr. Black’s home. The home was completely gutted and transformed into a brand-new home. While the repairs were happening, Hope Panhandle was able to house Mr. Black in a temporary camper outside his house. After the 2 months of repairs were completed, a welcome ceremony was organized for Mr. Black, and attended by all of the organizations that made the completion of the house possible.

These stories are only possible through the collaboration of multiple groups who all bring a specific expertise to the table. Good360 is proud to be able to play a role in bringing these groups together to bring amazing change to the lives of people who have been affected by disaster.