Sometimes it takes a disaster of historic proportions for the most fruitful alliances to take shape. That was definitely the case with Hurricane Harvey, which tore a wide swath of devastation across Texas and inflicted a staggering $125 billion in damage. In Harvey’s aftermath, U.S. corporations stepped up to contribute hundreds of billions of dollars in donations in one of the biggest relief efforts ever. Among those companies is one that’s new to Good360’s network of corporate partners, but certainly not to millions of American consumers and businesses who have relied on its products for more than a century — The Dow Chemical Company. When it comes to corporate social responsibility, Dow focuses its global citizenship efforts on creating sustainable communities where its employees are based. This makes perfect sense when you consider that the company’s core asset is its science and technology. Therefore, Dow has a vested interest in protecting and improving the lives of the people who make its technological innovations possible.

“It’s our goal to make the communities where our employees live and work into healthy, vibrant, resilient places to be,” said Justin Land, Dow’s global citizenship program officer. After Hurricane Harvey walloped much of Texas, home to some 12,000 of its employees and contractors, Dow’s response was swift and impactful. The company purchased 135 trailers for displaced employees to live in while their homes were being rebuilt. It also committed more than $2 million to support immediate relief, long-term recovery and other rebuilding efforts associated with the storm. 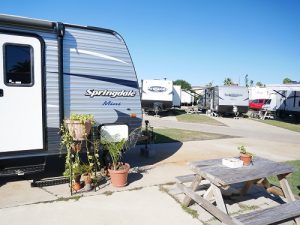 Over the course of 2018, as the floodwaters and immediate dangers of the hurricane receded and communities throughout the state slowly recovered, most of the Dow employees living in these trailers returned to permanent housing. The company started selling off many of the emptied trailers. Fortunately, Dow and Good360 had begun developing a relationship in late 2017. As Dow considered what to do with dozens of unsold trailers, the opportunity presented itself to create a mutual partnership that would leverage the resources and strengths of each organization. In one of the most complex donations in our history, Dow agreed to hand over the remaining 57 trailers on its books to Good360. We accepted the remaining trailers and repurposed them to benefit disaster recovery volunteers and Hurricane Harvey survivors who had few other options for housing. In total, the donation of these trailers has a fair market value of approximately $807,350.

This effort aligns with our organizations’ shared commitment to the long-term recovery of the hurricane-hit region. As of this post, Good360 has distributed more than $17 million in critically needed goods to a wide variety of nonprofits in the Houston area and other parts of southwest Texas.

Our partnership also demonstrates the importance of a holistic approach to disaster recovery, starting with the impacted communities’ immediate needs and committing to being there for the long-term. Earlier this year, on the one-year anniversary of Hurricane Maria, we launched the Resilient Response Initiative to push for this necessary shift in how corporations think about long-term disaster giving. In partnership with All Hands and Hearts – Smart Response and Global Citizen, the campaign centers on a six-point pledge that upholds best practices in disaster recovery. For Dow, having Good360 as a  partner in the donation process was integral to making it a success, Land said. 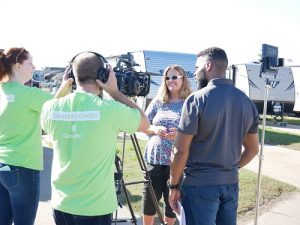 “The importance of having the right partner at the right time is critical for the donation of goods,” he said. “Donation management is crucial from the immediate aftermath to the long-term recovery of any disaster. And we’re grateful to have this partnership with Good360 so we can have the mechanisms in place to effectively and efficiently donate certain goods and make as big of an impact as possible.”

For dozens of displaced residents in southwest Texas, the trailers are nothing short of a godsend.  “I would sleep at friends’ houses or go to the pier and sleep on the beach,” said Reed Beeman, a Hurricane Harvey survivor who’s now living in one of the Dow trailers.

“Just being able to be a family again and being back on the island where we love being… I can’t express how grateful we are,” said Selena Esensee, another survivor and trailer recipient. “This changes everything. This gives us the opportunity to get back on our feet and actually have a home again.” 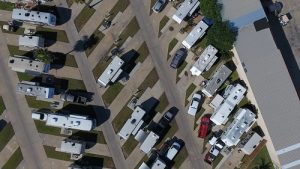 Sandcastle Christian Church in Port Aransas is receiving 30 trailers as temporary housing for area residents. Many homes in Port Aransas have yet to be recovered, forcing workers and volunteers out of the area. The nearest place for residency is approximately 50 miles away.

Meanwhile, Wharton Recovery Team will use 17 trailers for volunteer housing, as well as housing for families whose homes have been destroyed by Harvey.

After housing Dow employees, these trailers have for years to come “a much larger part to play in the story of the recovery from Hurricane Harvey on the Gulf Coast,” said Andrea Raiff, Texas Operations public affairs manager for Dow. “We feel like this partnership between Good360 and Dow is the next chapter in the story of that recovery.”