Rising to the Occasion: A Horrific Hurricane Season Prompts Creative Solutions from Good360 and Its Corporate Partners - Good360 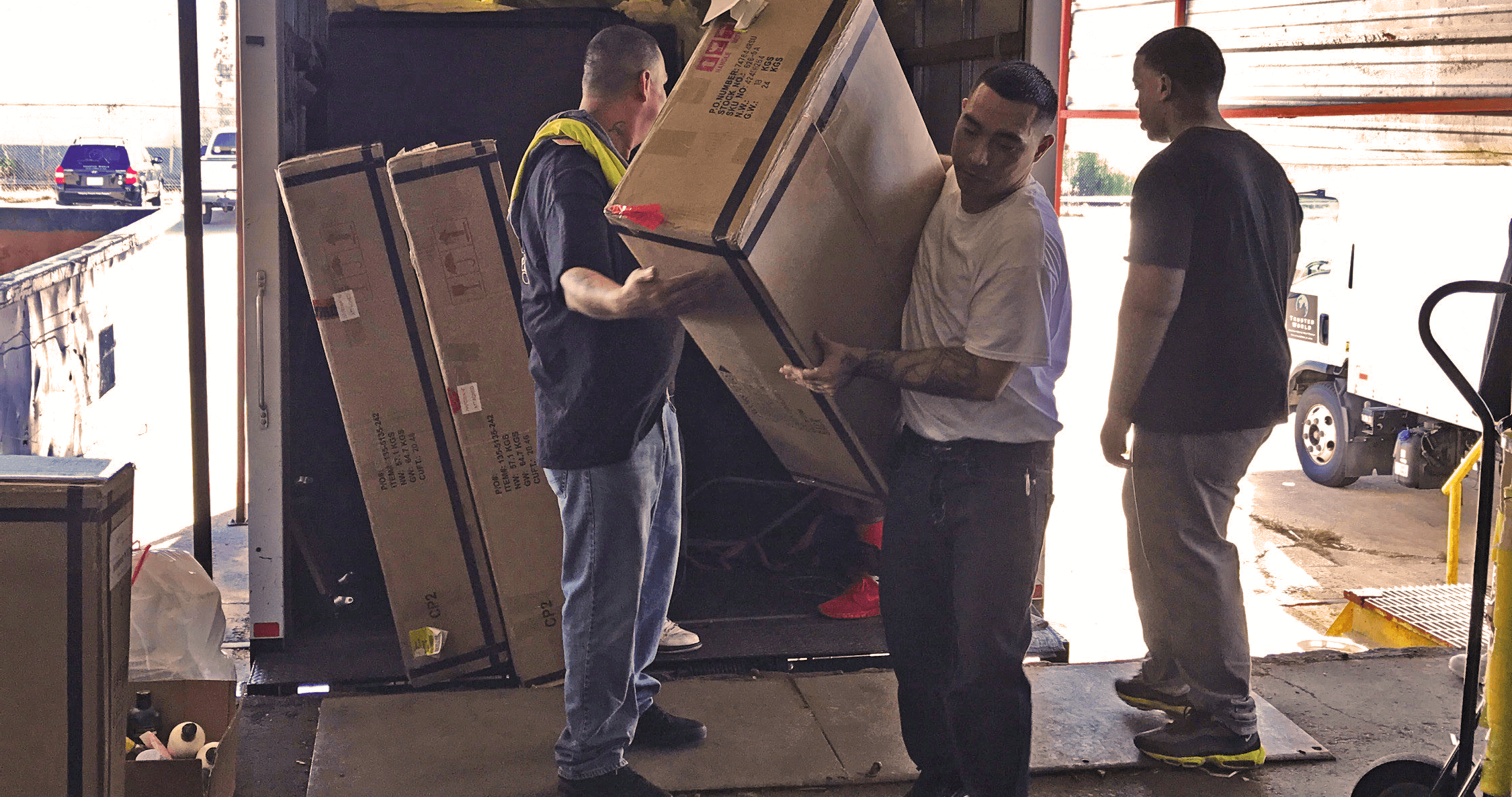 20 Oct Rising to the Occasion: A Horrific Hurricane Season Prompts Creative Solutions from Good360 and Its Corporate Partners

Posted at 08:51h in Blog Posts by Shari Rudolph

By every meteorological measure, 2017 has been one of the worst hurricane seasons on record — and it’s not even over. Through October 9, this year ranks as the 8th most active Atlantic hurricane season in recorded history. And there’s still time for more hurricanes to make U.S. landfall.

In dollar terms, the damage has been staggering. Moody’s Analytics predicts Hurricanes Harvey and Irma alone will cost between $150 and $200 billion in combined property damage, likely making 2017 the second costliest hurricane season after 2005 when Katrina devastated New Orleans.

For Good360, the string of massively destructive storms has forced us to engage our network of private, public, and nonprofit partnerships like never before. Within a few short weeks, we have reached out to numerous corporate partners and secured commitments for tens of millions of dollars in critically needed goods. From Houston to Miami, we have visited with dozens of nonprofit organizations to assess the immediate damage and understand what will be needed for the long-term recovery.

As an organization, we have had to stay nimble and come up with creative and collaborative solutions to respond to ever-changing conditions on the ground. However, our core principle remains the same: to get the right goods to the right people at the right time.

While the immediate safety of people and protection of property is obviously crucial, we also know that rebuilding these storm-torn communities will take many months, if not years —  many years, in some cases.

“Many of the product donations we have been able to secure won’t be immediately deployed,” said Tiffany Everett, Good360’s Director of Disaster Recovery. “Instead, we will determine when and what to deliver to vulnerable populations so that we can provide the most appropriate assistance.”

None of this work would be possible without the deep relationships we have developed with our corporate partners. Throughout this tumultuous hurricane season, they have responded with a level of urgency, seriousness, and generosity that underscores their commitment to being leaders in corporate social responsibility.

The UPS Foundation, the philanthropic arm of UPS, has been one of our most important partners, giving both cash grants and in-kind shipping support. So far this season, the foundation has provided our organization with access to $150,000 in in-kind logistics, which has already allowed us to move 46 shipments ($7.3 million in goods) through UPS.

Many of these shipments have actually been made by Coyote Logistics, a subsidiary of UPS that operates a network of 40,000 carriers to ship freight across the U.S., Mexico, and Canada.

Both UPS and Coyote have been able to respond quickly and mobilize their trucks to help us stage and pre-position goods throughout the hurricane-hit region. A key advantage of being able to tap their network of carriers is the ability to take goods from companies that are ready to donate now and deliver the supplies to staging areas where they will stay until they’re actually needed.

“UPS and Coyote are among the best in the business in terms of logistics,” Everett said. “They also understand the unique challenges of delivering into disaster zones. Being able to rely on their drivers, trucks, and expertise has been invaluable to our disaster recovery efforts throughout this hurricane season.”

In disaster recovery, finding the appropriate place to stage supplies and donations can be challenging. Fortunately for Good360, we are able to tap into a network of willing partners with available storage throughout the United States.

With the help of Shippers Warehouse and ALAN (American Logistics Aid Network), we secured donated warehouse space in Atlanta, a strategic location that allows us to more easily distribute to hurricane-prone parts of the Southeast United States. Shippers Warehouse also contributed resources to help us organize, sort, and load products for shipment.

Key warehouse locations such as the one in Atlanta are removed enough from major disaster zones, but close enough for us to pre-position products so we can respond more quickly during an emergency. Such logistical partnerships give us greater flexibility because we can take in products even when they’re not immediately needed and prepare them for shipment to meet the right needs at the right time.

Besides securing logistics, we have been reaching out to major partners to secure critical goods that will be needed for the long-term recovery. Among these items is high-quality bedding, which can be a huge expense for families to cover in the midst of trying to get back on their feet.

Tempur Sealy, a longtime Good360 partner, originally committed to donating $1 million in mattresses in the wake of Hurricane Harvey’s impact on southeast Texas and surrounding areas. As the 2017 Atlantic hurricane season marched on, the company felt compelled to increase its pledge by another $1.5 million, given the extent of the storm damage in multiple regions.

“It’s been hard to watch the devastation caused in Florida by Hurricane Irma on the heels of the damage in Texas caused by Hurricane Harvey,” said Scott Thompson, Tempur Sealy chairman and CEO. “But just as we witnessed in Texas, it has been inspiring to see the citizens of Florida pull together to help neighbors, friends and even strangers. As they begin to rebuild their lives, we want them to know that we and our retail partners will be there to help.”

Another Good360 partner, Sleep Number also donated $1 million in bedding products to help hurricane survivors. In a creative twist, the company also allowed and encouraged its customers to convert their loyalty points into cash donations for hurricane relief.

“Mattresses are a critical donation for the long-term recovery and rebuilding of a community,” said Everett about the Sleep Number donation. “Sadly, families often have to throw away everything due to water damage. We see people, including children, sleeping on floors and air mattresses after a disaster. A new mattress not only represents a tangible step forward in rebuilding a home, but it also helps restore some level of dignity to a family whose lives have been traumatically altered”

“At Sleep Number, we are committed to improving the wellbeing of youth through better sleep.  We know that quality sleep improves children’s immune system and overall development, and also helps them do better in school,” said Melissa Barra, chief strategy officer at Sleep Number. “During disasters, how kids are sleeping is often overlooked. With our donation, we hope to ease the recovery journey in a meaningful way by ensuring that children have a good sleep environment.”

Another Good360 partner, Citizen Watch, also leaned into its brand story with its “Get a Light, Give a Light” program.

For more than 40 years, the innovative watch company has produced timepieces that are powered by natural and artificial light, eliminating the need for battery replacement. Under its new partnership with Good360, every purchase of a Citizen watch on CitizenWatch.Com or at their flagship store in Times Square will be matched by the donation of a Luci solar-powered portable light from MPOWERD.

These Luci lights have already started to arrive at our warehouse and will be distributed to shelters, churches, schools and families affected by natural disasters.

We are delighted to make these sorts of creative partnerships with brands possible. Here are some of other interesting initiatives that we’ve developed during this hectic hurricane season:

These corporate partnerships illustrate what’s possible when we are able to creatively and collaboratively activate our private, public and nonprofit network. Because of our unique position as an expert connector between corporations and nonprofits, we are able to take the lead on disaster recovery efforts in ways that might not be possible for other nonprofits or even federal agencies. The massive damage wrought by this year’s unusually active hurricane season gave us some prime opportunities to take leverage this leadership role and help hard-hit communities from Texas to Florida.