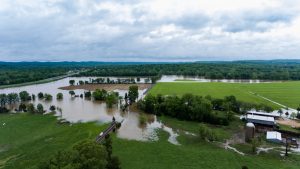 The American Midwest has endured a sustained period of extreme weather that’s hard to grasp, which ironically may be making it more difficult to rally donors to contribute to disaster aid.

In the month of May alone, the National Weather Service received reports of more than 500 tornadoes stretching across the Central Plains — an average of 20 every day — making it the most active prolonged period of tornadoes since the “Super Outbreak” of spring 2011.

Meanwhile, the Missouri River has seen massive flooding since mid-March along its banks as well as its tributaries in Nebraska, Kansas, Missouri, South Dakota and Iowa. A wet winter followed by a wet spring have contributed to the severe floods.

“This is shaping up to be a potentially unprecedented flood season, with more than 200 million people at risk for flooding in their communities,” Ed Clark, director of NOAA’s National Water Center, said in March.

In fact, the continental U.S. recently finished its soggiest 12 months in 124 years of modern recordkeeping, according to the According to the National Centers for Environmental Information. In some states, more than a month of rain fell in a single day.

While there’s no question that this kind of extreme weather spread over many states has an enormous impact, from lives lost to homes and crops destroyed, it’s also perhaps harder for the public to fully comprehend the scale and severity of the problem compared to a single, massive event such as Hurricane Harvey that dominates media coverage for weeks on end.

As a result, we haven’t seen the massive outpouring of donor support that a major hurricane hitting the U.S. mainland would generate, says Tiffany Everett, senior director of disaster recovery at Good360.

Working with our corporate partners, Good360 has been able to secure and distribute $700,000 worth of emergency supplies so far. These items include personal hygiene products, Hasbro PlayRelief kits for children and families in shelters, mattresses and bedding. And thanks to the UPS Foundation, we’ve been able to deliver these products where they are most needed.

But there’s still a huge need for disaster aid, especially cash donations, Everett says. Because of our established relationships with national retailers such as Walmart and other generous corporate donors, we are able to amplify every $10 in donations into a minimum of $100 worth of critically needed goods.

Product donations that are desperately needed include mucking and cleaning supplies such as shovels, buckets, mops, work gloves, and goggles. In addition, we are seeking supplies of personal care products, including baby wipes, diapers and socks. After the flood waters subside, homes and businesses will need to be rebuilt and furnished, so building materials, mattresses, bedding and new furniture will be needed.

Fortunately, we have the ability to store products at strategically located warehouses in Texas, Nebraska and Ohio. From these locations, which include our national warehouse in Omaha, we can deliver supplies throughout the Midwest and Southeast.

Of course, we continue to work closely with local nonprofits and recovery agencies in the impacted areas to determine the exact needs of the affected communities.

If you’re a nonprofit that needs product or a company looking to donate, click here for more information: https://good360.org/disaster/midwest-storms.

If your company can donate product and/or cash to support these relief and recovery efforts, contact Jim Alvey at jalvey@good360.org.

Individuals who would like to make a cash donation, can do so here.