VIDEO: Handing Out Hope to Refugees Settling Into a New Home - Good360

06 Dec VIDEO: Handing Out Hope to Refugees Settling Into a New Home

Posted at 14:13h in Blog Posts by Shari Rudolph 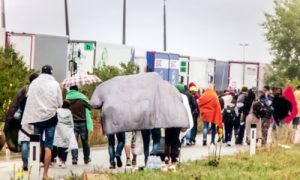 We are in the midst of an unprecedented global refugee crisis. The numbers are astounding. Approximately 68.5 million people around the world have been forced from their home — the highest on record, according to the Office of the United Nations High Commissioner for Refugees, otherwise known as the UN Refugee Agency.

Among the displaced are nearly 25.4 million refugees, over half of whom are under the age of 18. In fact, the UN reports that nearly 1 person is forcibly displaced every two seconds as a result of conflict or persecution somewhere in the world. A tiny fraction (less than 1 percent) of displaced people in the world are likely to ever find a permanent home.

Even as the number of refugees has climbed into uncharted territory, the United States has cut its refugee program to historic lows. In September, Secretary of State Mike Pompeo announced that the cap on the number of refugees allowed into the U.S. for the coming fiscal year would be cut to 30,000. This represents the lowest number in the history of the nearly 40-year-old resettlement program. 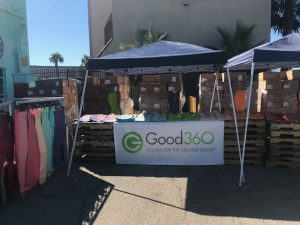 The worldwide refugee crisis underscores how critically important it is to help those who are able to make into the United States. Earlier this autumn, in partnership with Levi Strauss & Co. and several nonprofit organizations, Good360 participated in a major donation event to benefit more than 100 refugee families in the Las Vegas area.

Attendees at the event were given a choice of Levi’s 501 denim jeans in various colors, as well as other donations such as apparel, toys and grooming products, and personal hygiene items. Many refugees are simply struggling to learn English and find work, so these products go a long way toward helping them to settle into their new home.

By international law, a refugee is defined as a person living outside the country of his or her nationality because of persecution or a fear of persecution based on race, religion, nationality, membership in a particular social group, or political opinion. Indeed, many have faced horrific violence, including rape, torture and the murder of family members.

“All of these refugees have fled their country,” said Redda Mehari, Managing Director of the Las Vegas-based Ethiopian Community Development Council’s African Community Center, which assists legal refugees from all over the world, not just Africa. “When you are threatened by your own government, you flee in any way you can flee.” Along with the ECDCC, the donation event came together with the help of United Movement Organized Kindness and Catholic Charities of Southern Nevada. 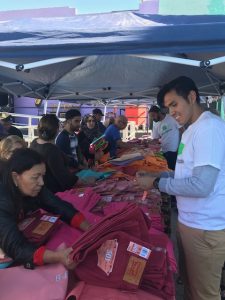 Although the U.S. admits refugees from more than 60 countries each year, the majority arrive from Africa or the Middle East, with Democratic Republic of Congo, Iraq and Syria making up the top three countries of origin.

What they all have in common is the need to rebuild their lives in a country where they don’t likely speak the language, understand the culture, or can easily find a job. The refugees are aided by resettlement agencies under contract with the State Department that provide them with housing, basic furnishings, getting children registered for school, applying for a Social Security card, and other social services.

All refugees are allowed to work and are encouraged to find employment as fast as possible. They must also apply for a green card within a year and are eligible to become U.S. citizens after five years. “The goal is to get them to work as soon as possible and make them law abiding U.S. citizens,” Mehari said. For these refugees, every donation brings them closer to establishing their new home and feeling more rooted in their adopted country.

Inspired by the enthusiasm and activism of its own employees, Levi Strauss has been heavily involved in refugee issues for several years and has given more than $200,000 for refugee-related aid. Proponents of increased refugee relief argue that it helps America by developing better relationships with other countries and shows our commitment to human rights and humanitarian aid around the world.

“Refugee resettlement is a humanitarian gesture,” Mehari said. “It’s part and parcel of our foreign policy. If we say we’re the most democratic country in the world where everyone’s rights are respected, then you have to show it by supporting people who don’t have those rights, who are being jailed for expressing those same rights.”