Posted at 15:19h in Blog Posts, Disaster Recovery by Good360 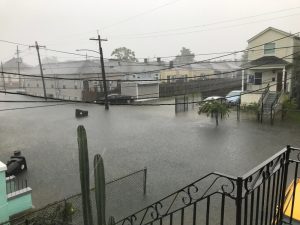 Barry originated as a tropical storm, made landfall as a hurricane Saturday, July 13, and quickly returned to its tropical storm status.  While its impact has been less intense than originally forecasted, the system has continued to inundate Louisiana with high winds and significant rainfall.

Disaster Impact: Heavy rainfall from Barry inundated southeast and central Louisiana throughout the weekend. Up to twenty-four inches of rain hit Baton Rouge, Livingston, and other areas already experiencing flooding and high river levels from previous storms.  Although the storm made landfall in southeast Louisiana, no portion of the State was left untouched. Fourteen years after Hurricane Katrina ravaged New Orleans, the city is once again in danger. The Mississippi River, already at its highest level in decades, threatens to overflow the city it runs through. Although the bulk of the storm has passed, its impact is still being felt. Heavy flooding has occurred in some areas along the coast, an early warning of what this storm season might bring to the Gulf Coast. Barry and the recent heavy rain in Louisiana have the potential to combine into a catastrophic flood event.

Good360’s Response: Good360 is working with local nonprofits and recovery agencies in the impacted areas to determine the exact needs of the survivors and mobilize its network of corporate donors to source critically needed goods. Although this storm comes relatively early in hurricane season, Good360 is prepared. Since 2016, Good360 has been working with corporate and nonprofit partners to develop appropriate, resilient plans for responding to large scale disaster in Louisiana.

Resources: Good360 is pre-staging supplies in our Houston, Texas warehouse for rapid, immediate deployment. Airbnb has activated its Open Homes Program to help displaced residents and relief workers deployed to the regions.

The Salvation Army Center of Hope Men’s Emergency Shelter opened its doors at 4 p.m., Friday, July 12, remaining open 24 hours a day until the storm has passed and conditions are again safe.

The Disaster Distress Helpline 1-800-985-5990 can provide immediate counseling to anyone who is seeking help in coping with the mental or emotional effects prior to and after such severe storm activity.

The Baton Rouge Area Foundation (BRAF) offers Employees 1st, a program that lets companies provide emergency assistance to their employees who are struck by disasters. Finally, as of now, there are 19 shelters open.

How you can help: We are all standing by to render immediate assistance to our partners throughout Louisiana.

Corporations with product donations to support any stage of recovery should contact Jim Alvey at Jalvey@good360.org.

Individuals who want to make a cash donation can click here https://good360.org/give