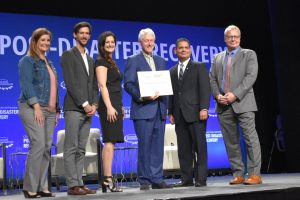 After Hurricanes Maria and Irma devastated Puerto Rico, the U.S. Virgin Islands, and other parts of the Caribbean in 2017, local leaders reached out to one of the most connected people on the planet for help. That person was Bill Clinton.

Under the umbrella of the Bill, Hillary and Chelsea Clinton Foundation, the former president promptly launched the Clinton Global Initiative (CGI) Action Network on Post-Disaster Recovery. Building on CGI’s “Commitment to Action” model of bringing together leaders to solve the world’s most pressing problems, the network is tasked with coming up with specific and measurable plans that promote recovery and long-term resiliency across the region.

Last week, the Clintons (Bill, Hillary and their daughter) landed in Puerto Rico to host the third meeting of the action network since its establishment. There, in the capital city of San Juan, the foundation announced that it would sponsor 30 more initiatives for the region, in addition to the 18 already underway.

Good360 is thrilled to be among the organizations that have been selected to spearhead these newly added initiatives. We will be launching a project called “Optimizing Corporate Disaster Giving and Engagement.”

With this initiative, we have committed to creating an actionable mission around thoughtful giving during disasters. Our goal is to educate and influence business leaders at a number of Fortune 500 companies so they will take a more proactive, needs-based, and long-term approach to disaster giving. 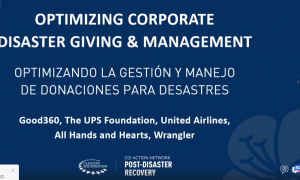 Our new collaboration with the Clinton Foundation aligns perfectly with our recent efforts to educate important stakeholders in disaster recovery. In 2018, we launched the Resilient Response campaign in conjunction with Global Citizen and All Hands & Hearts – Smart Response, which calls on corporate leaders to rethink how they respond to large-scale disasters to prevent waste and maximize aid. While Good360 do not receive any funding from the Clinton Foundation, this recognition dramatically increases awareness of the key challenges in disaster recovery and provides an additional platform for tackling those challenges.

Like the Clinton Foundation, we have also regularly convened a working group — the Good360 Disaster Recovery Council —  to bring together leaders from across the public and private sectors to come up with innovative solutions to address gaps in disaster giving.

In fact, our initiative with the Clinton Foundation will leverage existing cross-sector collaborations already developed by members of the council, including The UPS Foundation, United Airlines, CVS Health, Ecolab, RH (Restoration Hardware), Wrangler, the U.S. Chamber of Commerce Foundation, DollarDays, and All Hands and Hearts. 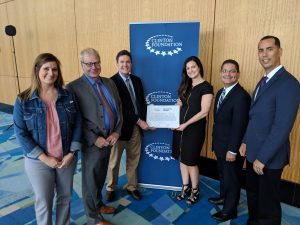 “The impact of stronger, more informed disaster giving practices means an acceleration of the recovery curve, building resilience for the future, and the true transformation of communities,” Sherman said.

To be sure, transformation has been a slow process in Puerto Rico. The small nation was already in crisis and officially bankrupt even before the Category 4 storms brought historic levels of damage in 2017.

More a year after the hurricanes left nearly 3,000 people dead, “nearly every pillar of Puerto Rican society remains devastated,” according to one academic’s recent account of the aftermath.

“To say that the island of 3.3 million has not yet recovered – from the damage or the trauma – is an understatement,” wrote Lauren Lluveras, a postdoctoral fellow at the Institute for Urban Policy Research and Analysis, at the University of Texas at Austin, in The Conversation.

“Our work is far from over,” Bill Clinton said at the meeting. “The work is not for those with short attention spans.”

The Clintons also toured parts of the island with Puerto Rican governor Ricardo Rossello, and met with farmers to hear about their ordeal during the hurricane and their struggle for recovery.

“One of the things that a storm of this magnitude does,” Clinton said, “is lay bare and make more acute already existing challenges.”