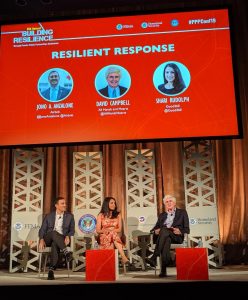 At Good360, we believe building communities that can better withstand the next disaster takes a village. It requires leaders from across various sectors of our society working collaboratively to identify and solve the biggest gaps in response and long-term recovery. No single organization can go at it alone.

That’s why we were thrilled to be invited to speak at the Building Resilience Through Private-Public Partnerships Conference in Washington, D.C., this week. As its name suggests, the event focused on fostering the collaboration needed among private, public, and nonprofit sectors to help mitigate the effects of large-scale disasters.

In its 8th year, the gathering is hosted by the U.S. Chamber of Commerce Foundation with support from the Federal Emergency Management Agency (FEMA), Department of Homeland Security (DHS), and U.S. Northern Command.

“All disasters are local,” the foundation asserted in announcing this year’s conference. “To support a community’s ability to react and recover quickly, we must improve the overall resilience of individuals, businesses, and communities. To that end, it is not only building their individual capacity towards resilience, but the intersections needed to protect the whole community.”

While all sectors can and should contribute to this effort, the two-day conference was especially keen on exploring how the business community can step up to leverage their considerable resources and influence to improve disaster preparedness. Companies should lean into their unique strengths to contribute in ways that make the most sense for them and drives the biggest impact possible.

During the conference, César Vargas, U.S. Chief External Affairs Officer at Anheuser-Busch, spoke about how the beverage giant was able to quickly switch its beer lines to produce cans of emergency water to send into disaster zones. The company also tapped into its extensive network of distributors to help move the water to where it was critically needed. This kind of disaster response leverages Anheuser-Busch’s unique capabilities, while also providing crucial relief supplies.

“As disasters continue to increase in frequency and level of devastation, we will examine the opportunity for the private sector to take a leading role in preparing, coordinating, and responding to disasters,” the foundation said on its event website. 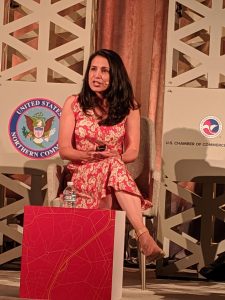 Not coincidentally, our Resilient Response initiative, launched last year in partnership with All Hands and Hearts, also focused on promoting better disaster-response practices within the private sector. It centers on a six-point pledge calling for companies to take a more thoughtful approach to their post-disaster giving.

At the Public-Private Partnerships conference, we presented on our efforts to promote the pledge and ask companies to commit to disaster giving that’s resilient-focused and addresses long-term needs, among other key goals. Joining Shari Rudolph, Chief Marketing Officer of Good360 for the provocative panel was David Campbell, Chairman and Co-founder of All Hands and Hearts, and Jono Anzalone, Global Disaster Response and Relief Partnerships Manager for Airbnb (which has joined our Resilient Response initiative and was one of the lead sponsors of the event).

Campbell emphasized the need to identify current gaps in assisting communities still recovering from Hurricanes Harvey and Maria, and pinpoint “where we need to all do better.”

We also spoke about the impetus for our Resilient Response initiative, the six key pillars, and the need to focus on disaster preparedness and mitigation. We underscored the need to pay attention to long-term recovery and not ignore this critical part of the disaster life cycle. 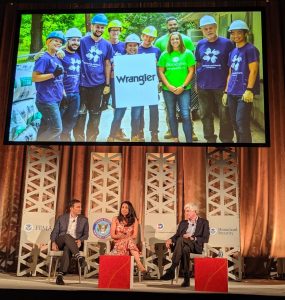 Anzalone from Airbnb concluded the panel. He said Airbnb was one of the first companies to sign on to Resilient Response and has been collaborating with Good360 every step of the way. He spoke about why the resilient response approach is important to Airbnb: “It just makes sense,” he said. “You can’t argue with the principles.”

Lastly, he made a clarion call for other companies to join the pledge at ResilientResponse.org.

Of course, our panel wasn’t the only talk on the role of corporations at the conference. Representatives from JPMorgan Chase & Co., The Walt Disney Company, Walmart, JetBlue Airways, Wells Fargo, and FedEx, among others, joined with leaders from FEMA, the American Red Cross, the U.S. Air Force and Department of Homeland Security to discuss how businesses can play a leading role in creating resilient communities.

The consensus among attendees was that key relationships and partnerships need to be established before a disaster strikes to make them effective. This requires facilitating more and better communication between and within sectors, which is exactly why we were delighted to be part of the conversation at the Public-Private Partnerships conference.

Click here to learn more about the Resilient Response initiative.