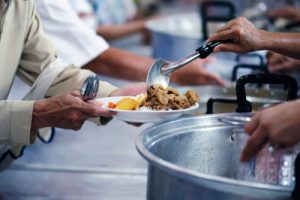 Hunger is a not-so-hidden problem in America.

In 2017, more than 40 million Americans lived in households that struggled with food insecurity, according to annual data from the U.S. Department of Agriculture. That equates to about 1 in 8 people in America. Among the hungry are more than 12 million children.

While the food insecurity rate declined slightly last year, it’s still higher than before the Great Recession. The 10-year trend isn’t encouraging either: In 2017, 3.8 million more people lived in food-insecure households than in 2007. 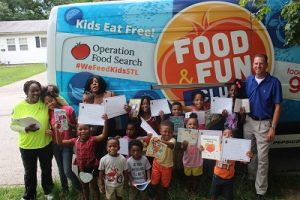 Food insecurity, defined as a household’s financial inability to regularly buy food, affects every county in America. It’s not just people living in poverty, either. Thousands of middle-class families are simply a layoff or medical disaster away from living with food insecurity. Since 1981, Operation Food Search (OFS) has been tackling this national problem by running a large-scale food bank, serving the St. Louis metropolitan region. For the past decade or so, Good360 has partnered with the hunger organization to help families get personal care products, clothes, and other non-food necessities.

OFS operates as one of our Community Redistribution Partners (CRP), which can take advantage of our corporate donations to supply nonprofits in their area with needed products. But unlike most of our CRPs around the country, OFS distributes all of its items free of charge and relies entirely on private donations. (OFS says that for every dollar donated, 98 cents is devoted to programs and services.) The scale of its operation is impressive. Every month, OFS distributes more than 3 million dollars worth of food and household essentials to 330 community partner agencies, which in turn, feed 200,000 people in need – nearly one-third of whom are children. That means the organization gives out more than $35 million worth of food and necessities every year. 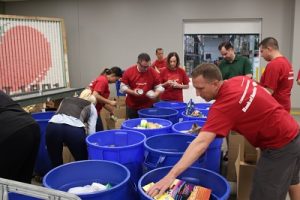 “Our mission is to nourish and educate our neighbors in need to heal the hurt of hunger,”
says Sunny Schaefer, Operation Food Search’s longtime, recently-retiring executive director. “St. Louis and its surrounding communities are good places to raise a family. But the reality is many people struggle with food insecurity here.

“Forty percent of kids live below the poverty level. There are a lot of people who are working two or three jobs, many times just earning the minimum wage, who are just not able to make enough money to meet their needs. It’s a diverse group of people.

The commonality is that they’re all low income,” she adds.Schaefer calls food insecurity a “persistent, ugly problem.”

“Food insecurity affects nearly every aspect of life,” she says. “It makes it difficult for children to concentrate in school and for adults to focus adequately on their jobs.” 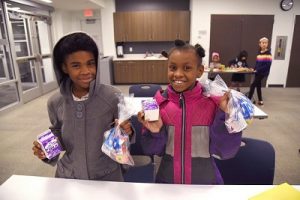 OFS collects food from grocery chains and wholesalers, and distributes it to food pantries, soup kitchens, shelters, and through its own mobile pantry. The organization runs other programs, such as nutrition education, cooking classes, a winter coat donation, afterschool and summer meals for children, and Operation Backpack to keep kids fed through the weekend. The products that OFS sources through Good360 allow the organization to round out its food donations with personal care items such as shampoo, feminine products, and toothpaste. “These things are necessities to most people, but for people living with food insecurity, they’re luxuries,” Schaefer says. “We’re really grateful for this partnership with Good360. It allows us to bring in different products that we wouldn’t have access to.” OFS operates a 70,000-square-foot warehouse where its partner agencies can pick up these items, as well as the food to distribute to their constituents.

After 22 years with Operation Food Search, Schaefer plans to retire at the end of this year. What began as a volunteering job a few days a week has blossomed into a long career of helping thousands of families and kids get the nourishment that they need. “We go into this kind of work to make a difference in the lives of people in our communities,” Schaefer says. “While we’re doing that, our own lives change. We feel a kinship to each other and the people the serve.”

If you are a qualified nonprofit organization that’s interested in getting goods from one of our Community Redistribution Partners, or you would like to become a CRP, check out our information page here.